By Mauricio Alvarez-Mesa, PhD, Sergio Sanz-Rodríguez, PhD — In this technical blog we discuss how to support High Dynamic Range (HDR) for 8K video. We present the options available for 8K HDR playback and their capabilities and limitations, and we show how Spin Digital’s media player (Spin Player) can meet the requirements of 8K HDR applications using a software solution based on the latest generation of computing systems (CPUs and GPUs) and AV interfaces (HDMI 2.1).

The 8K video format is much more than higher resolution. It is designed to provide a stronger sensation of reality and a greater immersive experience. In order to achieve this, the 8K format combines higher pixel counts (four times higher than 4K UHD), with High Dynamic Range (HDR), Wide Color Gamut (WGC), and potentially High Frame Rates (HFR).

Therefore, an 8K media player has to support, at least, 8K resolution, 50 or 60 fps, 10-bit, some of the common HDR and WCG formats, and optionally HFR. The requirements of 8K professional and distribution 8K formats are summarized in Table 1.

If static metadata is added to PQ, the format is called HDR10. Other HDR formats support dynamic metadata such as Dolby Vision, HDR10+, and SL-HDR1. The following table shows the main properties of PQ, HLG, and HDR10.

When the media player receives an 8K HEVC bitstream, the following information is required for appropriate HDR playback:

The decoder decompresses the HEVC stream and passes the decoded video frames together with the metadata to the video renderer. The video renderer produces the final rendered frame that is sent over the digital AV interface to the display. In addition, in a PC-based system, the video rendering engine has to perform composition with other graphical sources. Figure 1 illustrates the flow chain of a typical software media player with a GPU-based renderer.

Figure 1: Flow chain of an 8K media player for HDR with GPU rendering

Currently, when using Windows 10 PC systems only the HDR10 (PQ) format is supported for HDR playback. HLG content therefore has to be converted to SDR using tone (and gamut) mapping. The table below shows the capabilities of Spin Player when using GPU rendering on Windows 10.

The figure below shows the player flow chain when using HDR10 (PQ). The entire chain is supported in HDR10 (PQ) and therefore conversions such as tone mapping are not needed.

Figure 2: Flow chain of an 8K media player for HDR with PQ format

Until relatively recently, 8K playback using Spin Player or other software players required an AV interface with four cable connections. The most common interface was four DisplayPort outputs that required, in turn, to be converted to four HDMI 2.0 connections before they could be connected to the 8K TV. This 2×2 HDMI 2.0 format was supported by early 8K TVs. Due to some limitations of GPU drivers this format did not not support any HDR format.

With the launch of the new generation of GPUs and 8K TVs supporting the latest version of the HDMI interface (2.1), 8K playback is not only simpler, since only one cable is needed to connect to the TV, but is also possible to play 8K with HDR.

HDMI 2.1 is the latest version of the HDMI format for transporting audiovisual signals to TVs. Unlike its predecessor (HDMI 2.0) that accepts signals up to 4Kp60, this new version supports higher resolutions and frames rates including 4Kp120 and 8Kp60. In addition, HDMI 2.1 supports static and dynamic HDR metadata to adapt the dynamic range of the content on a scene basis or even a frame basis.

What are the Advantages of HDMI 2.1 for 8K Playback?

The new HDMI 2.1 format offers several advantages for 8K playback with respect to the previous system based on HDMI 2.0:

Spin Digital’s media player has been validated successfully for 8Kp60 HDR playback using the HDMI 2.1 interface. The recommended playback system for 8K “distribution format” consists of a workstation with the following components:

8K HDR playback with HDMI 2.1 has been validated using a Sony KD-85ZH8 8K TV. 8K content in PQ format including static HDR10 metadata was encoded in HEVC. Spin Player decoded the HEVC stream and performed rendering in HDR10 (PQ), as shown in the figure below. Windows 10 was configured for HDR10, and the GPU was configured for 8Kp60, 4:2:0, 10-bit format. 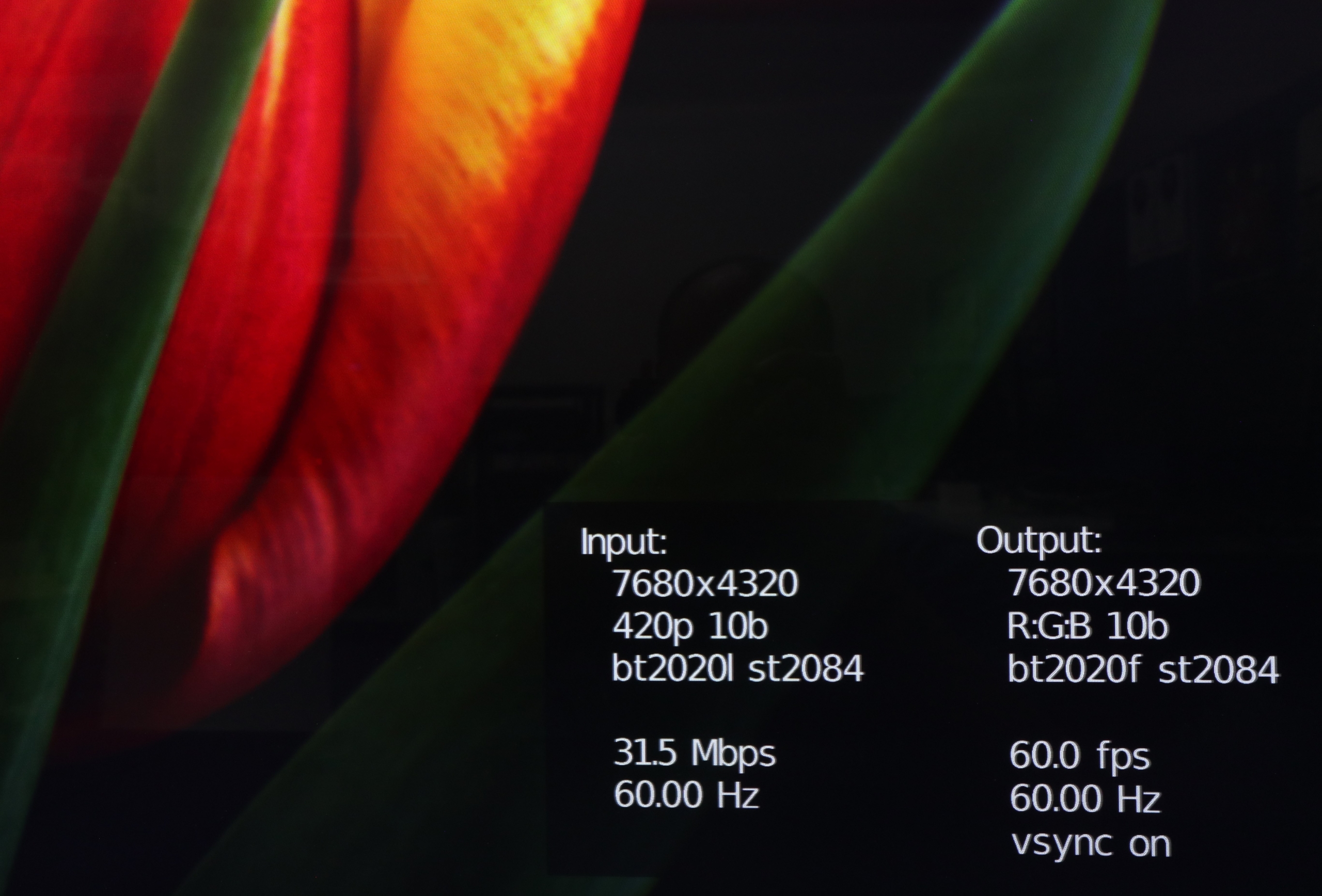 More information about recommended platforms can be found on the Spin Player website.

8K HDR playback is now possible using optimized software media players. HEVC decoding with HDR metadata can be performed on a desktop CPU, and HDR rendering can be performed using a recent GPU together with an OS compositor that supports HDR. Latest GPUs also offer support for the HDMI 2.1 interface that allows for single cable and HDR for 8Kp60 content. As a result, an end-to-end HDR experience is possible. Currently Windows 10 based systems only support the HDR10 format. Other HDR formats such as HLG require tone and gamut mapping. HDR support in PC systems and HDR formats in general are still evolving. In the future we will analyze the support for dynamic HDR formats such as Dolby Vision, HDR10+, and others.

These recommendations are based on internal tests performed by Spin Digital. This information is provided “as is” and it does not imply any warranty or assurance. If you have more specific requirements, please contact us.

Other trademarks remain the property of their owners, and are used here for descriptive purposes.