By Sergio Sanz-Rodriguez, PhD — Virtual Reality (VR)/360° video is one of the hottest topics in the multimedia industry and film production. The real world is captured by an omnidirectional camera consisting of a set of cameras covering different regions in the space. Then, the acquired pictures are stitched together to create the 360° or panoramic picture. Once created the master file, the 360° video is encoded for final delivery in Head-Mounted Displays (HMDs).

In order to preserve the maximum possible quality and, therefore, to keep the original intention of the filmmaker content wise, the video encoder plays a paramount role. Spin Digital HEVC/H.265 Encoder (Spin Enc) has been optimized for that purpose. A formal subjective quality assessment was conducted to find the minimum encoding bitrate that ensures high quality video in HMDs.

This blog describes the design and implementation of the subjective test and summarizes the obtained results. Within the context of the EU-funded DDD60 project (ddd60.eu), this work is the result of the joint collaboration between Spin Digital, reelport, Marché du Film, Tampere Film Festival, Sheffield Doc/Fest, and Sunny Side of the Doc.

The subjective experiment was carefully implemented taking into account all the aspects and details specified in the ITU-T P.913 Recommendation on “Methods for the subjective assessment of video quality, audio quality and audiovisual quality of Internet video and distribution quality television in any environment” [P.913, 2016].

In the end, a total of 36 video clips were prepared for the purpose of the subjective experiments. The order of presentation of those clips were randomized to avoid any kind of memory bias during the voting process.

A total of 45 minutes were estimated for the whole subjective test per user. The test was divided into two viewing sessions of approximately 15 minutes each, with a mandatory 5-minute break in between and some extra mini breaks during the sessions. In each session the participant had to assess the subjective quality of 18 clips of 30 second long each.

Based on the guidelines given in P.913, the data collection procedure was as follows: the experimenter opens the video file with number 1; the participant watches the clip and tells one of the following scores: 1 “bad”, 2 “poor”, 3 “fair”, 4 “good”, 5 “excellent”; the experimenter writes down the value in the corresponding cell; and so on with the next videos files.

The experimental setup we used in this work is the following:

It consisted of a preliminary execution to check the experimental equipment and software use. With this pre-pilot the experimenter could also detect issues with the test methodology. Those issues were taken into account for the next stages.

An internal pilot test was conducted with a reduced number of users (mainly project partners) in order to detect any issues with the test methodology, total duration, PC and HMD usability, and selection of the clips.

The feedback and recommendations given by the subjects helped the experimented to elaborate a more clear instructions to the users for the final test. Some of those recommendations include:

The final test was performed by all the project partners at their offices during a time period of one month.

A total of 50 people participated in the official subjective quality test. If we classify the participants by gender, 27 of them were women and 23 men, and, by use of glasses, 21 wore glasses and 29 did not. However, the results given by some users were very inconsistent and out of any logic. For example, one user suffered technical issues during the test and four subjects could not see any difference in quality because of the low resolution of the HMD.

Those outliers were removed based on the rejection criterion specified in P.913. After applying that method, eight users were discarded for the final results. A total of 42 participants were finally used to generate the results. The gender distribution was: 23 women and 19 men; and the use of glasses distribution was: 18 with glasses and 24 without glasses.

The results concerning the bitrate specification for Spin Enc are summarized in the next figure. The figure shows the Mean Opinion Score (MOS)-vs-bitrate curves associated with every video sequence the resulting average curve. 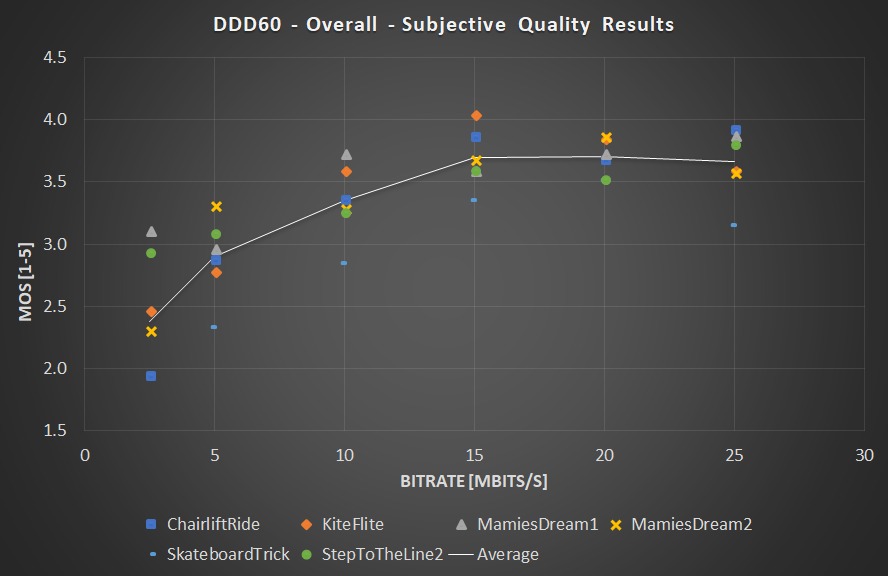 According to these results and the feedback given by the participants, the following conclusions can be drawn:

The results of the subjective quality assessment show that 15 Mbits/s in VBR mode is the minimum bitrate required to ensure high quality 360° 4Kx2Kp30 video using Spin Enc. Bitrate values for other video formats can be derived from the frame resolution and from the fact that doubling the video frame rate results in about 30% increase in compressed data.

This activity has received funding from the European Union’s Horizon 2020 research and innovation programme under grant agreement No 732717 (www.ddd60.eu).